The team take a look back at the Farnborough Airshow

The team take a look back at the Farnborough Airshow

The show has been held since 1948 and today the 7-day international Air show continues to be a launch platform for aviation innovation and new aircraft, welcoming over 100,000 people through its gates every two years. This year’s FIA trade show was opened by UK Prime Minister Theresa May in which the first day saw $46.4 billion in deals, surpassing the figure achieved in 2016. Orders were placed for 311 civil aircraft across the show worth $43.6bn, as well as more than $2.8bn in engine orders.

The show presented a great variety of aerospace supply chain companies, as well as some impressive new technology. Tri-Tech 3D were based in the Aerospace 4.0 hall, which was a new venture for this year’s air show.

What types of conversations did we have at the show?

Over the duration of the show, we had some in depth conversations with visitors on how to incorporate additive manufacturing into their business. Our most common enquiries were material based in which the team had various discussions surrounding ULTEM and the new Stratasys Antero 800NA PEKK-based material.

Some of the common applications enquired about included tooling, manufacturing aids and customisation of aircraft interiors.

One of the best parts of the show was seeing the Airbus A350 fly over us with over 1000 3D printed parts incorporated into the aircraft!

What kind of people did we meet?

Over the course of the five days, the team enjoyed speaking to a variety of different visitors, ranging from senior Aerospace Suppliers and Design Engineers, all the way to Students looking to expand their knowledge. They also got to meet a couple of members of the UK and US air force for an interesting tour around some of their latest aircraft!

The team received a great amount of enquiries about the new Desktop Metal Studio System after it recently came onto the market as the most affordable metal prototyping system. Discussions were had on the possible applications for metal prototyping within the aerospace industry and the team are looking forward to following up those enquiries over the coming weeks.

As well as Desktop Metal, we were inundated with questions around the new PEKK-based Antero 800NA material. Antero 800NA has been named as the most superior thermoplastic in the Stratasys FDM materials range and possesses qualities of high heat and chemical resistance, making it ideal for applications under hood and in engine compartments. 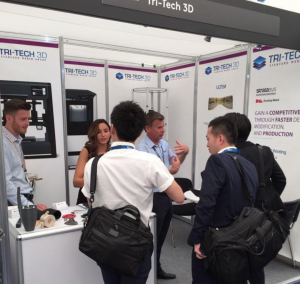 Overall, the team had a fantastic five days talking to customers old and new, discussing the latest AM developments for Aerospace. It was particularly great for our team to witness the parts made by Stratasys 3D print technology on board some of the aircraft at the show.

For those customers who submitted enquires with us, the team will be in touch within the next couple of weeks to arrange a chat. We’re excited to see that more and more Aerospace companies are beginning to adopt AM technology and we can’t wait to see what future partnerships are created in the near future.

Thank you to everyone who visited us over the course of the 5 days! If you would like to get in touch with us in the meantime, please call us on 01782 814551 or email info@tritech3d.co.uk

Did you miss us this time? You can catch us next at the TCT show at the NEC from the 25th to the 27th of September!