Incorporated in 1989 by a team of experienced molders and mold-makers, USA-based Innovative Plastics is today one of the largest custom injection molding companies in northern Alabama. The company produces tooling and molding to the automotive, recreational boating, medical equipment, and consumer products industries throughout the South East.

The most common manufacturing method for plastic parts, injection molding works by forcing melted plastic into a mold under pressure. Within seconds, the plastic cools, allowing the mold to open and eject the solidified part, and the cycle starts again.

Today, the injection molding process is used to produce a huge variety of parts and products, everything from children’s toys to automotive parts to surgical tools.

For companies, like Innovative Plastics, that specialize in the process, many of the challenges they face come down to one key issue – speed.

In addition to quickly creating molds for new products, molding companies also seek to shorten the cycle time – the time it takes to inject plastic, cool it, eject a part, and re-close – in an effort to increase production. When factored over 24 hours of continuous production, improvement in cycle time – even of just a few seconds – can translate to production increases of 25 percent or more.

To meet those challenges, Innovative Plastics is investing in next-generation manufacturing technology, including metal 3D printing.

Using traditional methods like CNC machining or wire EDM, the mold typically would take about six weeks to produce.

But because it eliminates the need for complex fixturing, the Studio System enables engineers to print near-net-shape parts in less than a week. Even factoring in the need for post-production steps, the 3D printed mold was ready for use in just two weeks, reducing downtime on manufacturing lines.

And with a cost of between $6,000 and $8,000 – which includes the cost of machining the parts to meet critical dimensions – the printed mold is significantly cheaper than those that were produced via traditional methods, which can cost up to $12,000. 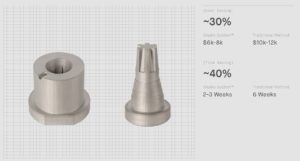 In addition to cutting lead time and cost, 3D printing allowed engineers to incorporate features – like conformal cooling channels – into the mold that would otherwise be impossible to manufacture.

By allowing the mold to cool faster, the channels helped shave up to five seconds off the mold cycle time, allowing them to produce more parts per day. Faster production allows the company to fill customer orders faster, take on more jobs, and reduce lead time, giving them an edge over their competitors.

But printing molds also offers less obvious benefits. Because each print run on the Studio System requires only about 20 to 30 minutes of operator time, used to move parts between equipment, highly skilled CNC and EDM operators are free to focus on other jobs, increasing shop efficiency.

After investigating a number of metal 3D printing systems, Innovative Plastics opted to use the Studio System in part due to its wide range of available materials.

While the exhaust cover molds were created using 17-4 stainless steel, engineers have also created molds using H13 tool steel to leverage its exceptional hot hardness, allowing the mold to remain functional while molding abrasive material at high temperatures and pressures over hundreds of thousands of cycles.

Alloys like tool steel are also desirable for molds because they allow for the injection of material under higher pressures, enabling the formation of more precise details.

Printing mold cavities and cores on the Studio System was a success for Innovative Plastics, resulting in significant savings in both time and money, as well as enabling shorter injection cycle times.

The printed parts were produced in approximately one-third of the time needed to create mold parts via EDM, meaning Innovative could use additive technology to quickly produce new molds as needed and keep manufacturing lines running with little downtime.

Additive technology also makes it easy for Innovative to repair or replace inserts or other parts of a mold far faster and with less expense than waiting for traditionally-manufactured replacements.

The addition of conformal cooling channels to the mold parts also offered significant benefits. By shortening the molding cycle time by just five seconds, the company was able to increase the daily production of the exhaust cover caps by more than 3,400 parts per day.