Getting to the heart of the matter - with PolyJet

As a referral center, Colorado Children’s Hospital sees some of the most complicated congenital heart defects. One such case was a 4-year-old child born with tricuspid atresia, a congenital heart defect that affects approximately 1 in 10,000 births in the United States. Children with this condition are born with low oxygen concentrations in the arterial blood and are referred to as cyanotic.

This particular case presented a unique challenge because it involved an extremely rare variant in which the ventricular cardiac chambers were arranged in a superior-inferior position compared to the typical side-by-side arrangement.

It Takes a Team to Mend a Broken Heart

Max Mitchell, M.D., a congenital cardiac surgeon, and Kathryn Collins, M.D., a pediatric cardiologist specializing in electrophysiology, reviewed the child’s history to determine her next treatment steps. At birth, her tricuspid valve that normally controls blood flow from the right atrium to the right ventricle was not formed, preventing blue blood from getting to her right ventricle and out to her lungs. The main pulmonary artery was also too small to provide adequate blood supply to her lungs. A hole between the right and left atria, known as an atrial septal defect, allowed a mix of oxygen-rich and oxygen-poor blood to be pumped through her body.

To address these issues and enable the child to grow, a shunt had been placed in her as a neonate between the pulmonary artery and the aorta allowing blood to get to the lungs. And at 12 months of age, she underwent a bi-directional Glenn procedure, the first in a two-stage surgical strategy that bypasses the heart entirely and pumps the blood returning from the tissues directly to the lungs. After the Glenn procedure, Dr. Mitchell and his colleagues determined that the child was a candidate for the next stage of surgery known as the Fontan procedure, the second in the two-stage surgery.

In addition, it was imperative that her accessory electrical pathway is ablated prior to completion of the surgery because it would be impossible to address in a catheterization laboratory after the Fontan procedure and because all the venous connections from her body to her heart would no longer exist. This would leave no route to get a catheter to the accessory pathway. Dr. Collins attempted to ablate the accessory pathway in the catheterization laboratory but was unable to contact the accessory pathway due to the markedly abnormal anatomy. As a result, she approached Dr. Mitchell to gauge the feasibility of a surgical ablation at the time of the planned Fontan operation.

Even for experienced congenital heart surgeons, echocardiograms are not easily related to 3D anatomy in complex, rare cardiac anomalies. After reviewing an MRI scan of the patient’s heart with 3D reconstructions, Dr. Mitchell was concerned that a surgical ablation carried a high risk of failure. 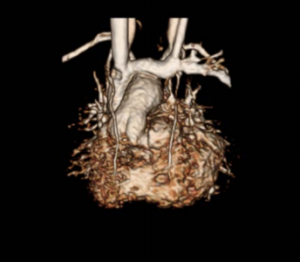 He approached colleagues at the University of Colorado Anschutz Medical Campus to have a 3D patient-specific model printed and cut into sections for a better understanding of her cardiac anatomy. The model needed to be printed with materials that simulated the look and feel of the patient’s heart

Nicholas Jacobson, the design lead on the case, and Hayden McClain, student assistant, helped design the 3D printing process for presurgical planning with the team — orchestrating early brainstorms to determine the design of the model that would be used. Dr. Michael DiMaria, the lead cardiologist on the case, was instrumental in guiding Jacobson in determining which anatomy was crucial to capture in the model due to his intimate knowledge of the patient’s diagnosis. Designed to fit the team’s surgical specifications, the model was ultimately created using a custom Agilus30™ and Vero™ White multi-material blend.

In preparing for the electrophysiology (EP) lab procedure, Dr. Mitchell and the cardiology team used the model to plan the approach. The flexible and functional nature of the model allowed them to stretch and pull certain areas to understand the interior topology and flow paths. Dr Mitchell commented..

To further assess the movement of blood through her heart, Dr. Mitchell’s research team performed a 4D-MRI flow analysis. This allows the investigator to picture the blood flow through the heart and into the blood vessels. Due to the very unusual orientation of the takeoff of her aorta, Dr. Mitchell suspected that blood flow through the ventricles and into the aorta would be highly abnormal and likely inefficient. This proved correct, and he requested a multi-material 3D print of the heart demonstrating the very unusual blood flow pathways prior to surgery. 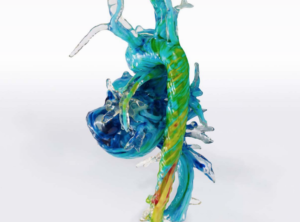 Dr. Alex Barker, the Director of the Advanced Imaging Lab and early pioneer of the 4D Flow MRI imaging process, worked with Dr. Mitchell and Jacobson to generate and extract the 4D flow data into a format that could be used to 3D print the new heart model. Each color used in the model was coded to a velocity.

Ultimately, both the surgeon and the patient benefited from this personalized approach to medical treatment. Dr Mitchell made a final comment: